The latest edition of the Swiss Environment & Energy Innovation Monitor analysed 673 cleantech startups in Switzerland. With up to 92 startups founded annually between 2011 and 2020, the study found that the ETH and EPFL are strong innovation drivers with Zurich showing the strongest growth. While the number of newly founded start-ups shows an upward trend, the sector has remained male-dominant with only 6 percent being female-founded.

The Swiss Environment & Energy Innovation Monitor by the ZHAW School of Management and Law and eqlosion provides information on innovative Swiss startups in the environment and energy business sectors. At the beginning of each year, a yearly monitor is produced to show key information about startups founded in the last ten years.

Since 2011, between 40-92 companies have been founded each year in the energy and environment sectors, with peaks in 2013 and 2017. The overall upward trend of founded startups is a positive sign signalling potentially both an improvement in startup conditions in Switzerland for these sectors, as well as an improved visibility overall of these companies. For 2020, the lower count is due to the low visibility of newly founded companies on the market. Currently, 603 companies are still in operation. 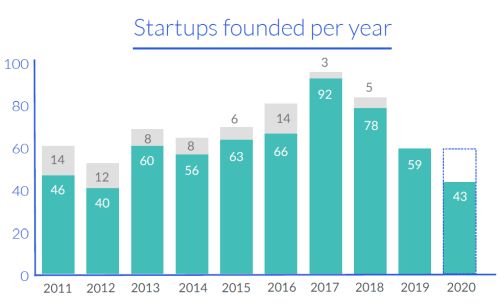 The size of most startups is small with 45% of the companies having 1-5 and 5-19 employees respectively and only 11% with more than 20 employees. The study also found that while 54% of startups offer a tangible product, about 1/3 offer services and 15% provide software solutions. Often the software or hardware also comes with additional service, this is not counted in the service numbers.

These results show that the energy and environment area is still very much a production sector where innovation comes with new technology or hardware. Most startups sell their products to companies. Approximately half of them also target authorities and another 50% sell to private households, too. Only 12% only target private households.

ETH Zurich and EPFL remain innovation-drivers
The Lake of Geneva and Canton of Zürich regions, with the EPFL and ETHZ respectively, prove to be strong drivers of innovation, as the majority of startups (385 startups) are founded here not only in absolute number but also relative to the regional population. However, in the last years, Zürich shows the strongest growth with the highest founding rate overall (221 startups). While the number of founded companies differs strongly between regions, especially the canton Tessin is effective in fostering entrepreneurship – to-date 29 startups have been founded in the region.

Male-founded companies remain dominant
The monitor has been collecting data on the gender of the startup founder and found that 79% of founders are male. Only 15% of startups are founded by mixed teams and as few as 6% are founded by one or more women. Although there is a slight increase for female founders, compared to the previous extract, more work is needed to support more gender diverse teams to engage in the environment and energy sector.

Data collection was conducted yearly through extensive internet research and an online survey and is supplemented by data received from startups on the monitor’s website.