A total of 12'695 new companies were founded in Switzerland from January to March. This corresponds to a slight decrease of -3.6% compared to the same quarter last year. This is shown by the daily updated national analysis of the IFJ Institut für Jungunternehmer.

Following an exceptional record year, the number of new companies in the first quarter of 2022 is at its second-highest level. After the last two pandemic years were characterized by a veritable start-up boom, the current start-up figures are settling back into a stable and positive trend, as in the period before COVID-19.

On average, 11'984 new companies were registered per first quarter over the last 5 years. Despite a decrease of -3.6% compared to the same period last year, the first quarter of 2022 with 12'695 new companies is significantly above the 5-year average and continues the stable and positive trend of the pre-pandemic period. 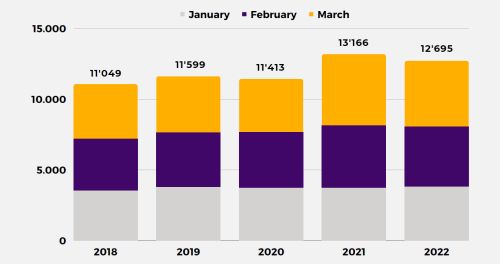 In Switzerland, the limited liability company (LLC) is by far the most popular legal form when it comes to founding a new company. While an increase of +2.1% was recorded in the first quarter of 2022 with a total of 5'106 LLCs, the sole proprietorship recorded a decline of -8.4% with 4'185 new formations.

Which regions are recording positive values?

Detailed information can be found in an IFJ blog post.